skip to main | skip to sidebar

Does the Top Stop?

Last summer the movie screens were rocked by "Inception" and my boyfriend was definitely not the one to be immune to the craze. He scoured the internet for images of Joseph Gordon-Levitt's suit, made sure the DVD was included in his Christmas wish list, and downloaded the soundtrack to listen to at leisure. When I came across this poster on etsy.com it almost seemed like it would be offensive to my Leo-loving boyfriend to pass it up. 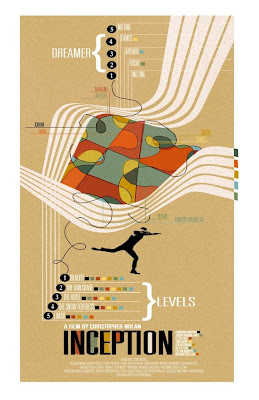 Adam Juresko is the mastermind behind this poster, and he also has plenty more awesome movie posters to choose from on his etsy shop (TheArtOfAdamJuresko). I was pretty partial towards this poster because of the design and layout, whereas my boyfriend was enthralled with how it depicts the movie (so a win-win). We both agreed that Adam's shop included some of the best movie posters on etsy, not to mention the transaction was smooth and he was more than willing to answer all my questions (and I ask a lot!) very quickly.
So anyway, Joseph Gordon-Levitt... 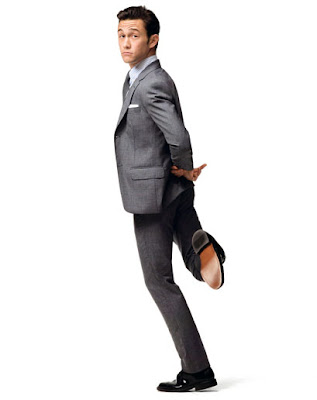 [from] etsy and here
Posted by Andrea at 8:59 PM No comments: 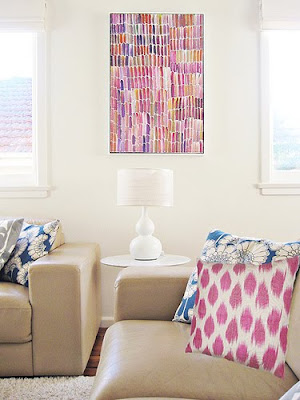 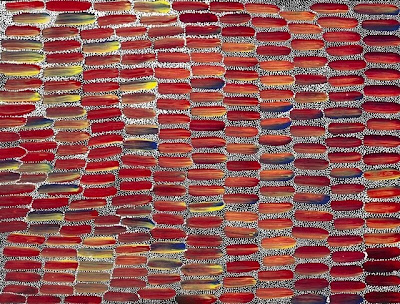 These pieces of art are by an aboriginal artist named Jeannie Mills Pwerle. This is one of the bookmarks on my computer that I have visited endlessly for about a year now. I finally decided to try to recreate this piece because I figured, how hard could it be? To answer that for you, it is very simple and costs close to nothing compared to the pricetag for an original by the aboriginal. (I had to)
Materials: 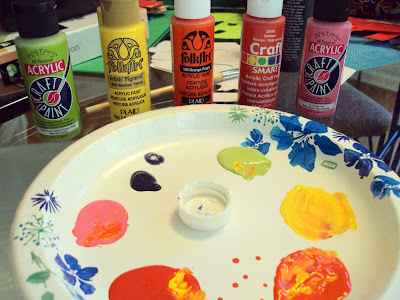 There's not too much technique to this, but I basically dipped my paintbrush into about two or three of the colors and took it to the canvas for a single stroke. Here is one up close. I love how you can see the different colors in the one stroke. 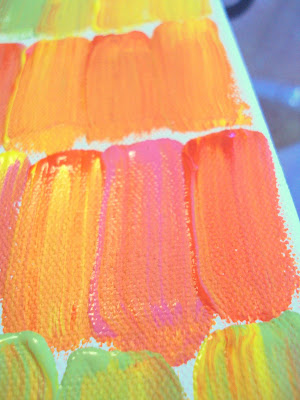 After doing strokes all over the canvas, I was left with this. It took about 20-30 minutes. 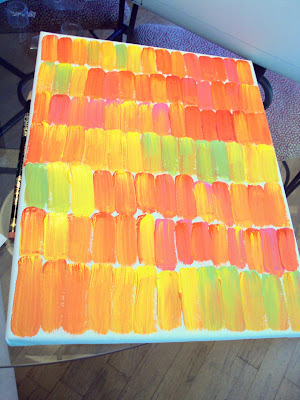 I was playing back and forth on a scrap piece of paper about whether to add the dots in between each stroke, but my parents convinced me to leave it as it was. I have to say that I agree. I love the dots on Jeannie's work, but I was pretty satisfied with my piece without the dots. 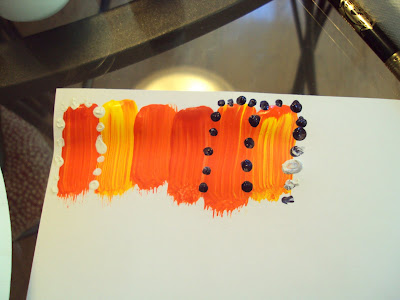 And now the finished piece hung on the wall. I love the color that it can bring to any room and how easy it is to master. You can make it totally unique with different colors and lengths. 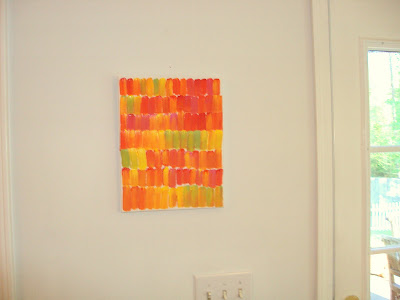 [from] flickr and Aboriginal Art Coop Gallery
Posted by Andrea at 6:21 PM No comments:

Drum roll, s'il vous plait! Here is the headboard in all of it's glory. This first picture is a little more sharpened than the second, but hopefully you get a good idea of how it turned out. 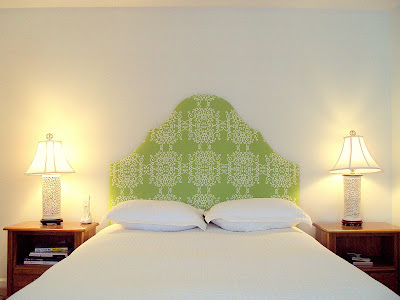 The last step was to staple the fabric to the headboard. We had to make sure that we centered the fabric with the headboard on the ground as we pulled the fabric up tightly to make sure it was taut. One of the problems we ran into was pulling it tightly though. As you can see in the picture of the different styles of headboards, the "Portman" has a horizontal area next to the semi-circle on top. I was very persistent on making sure the fabric allowed me to make the angle there, but it was useless. We ended up putting some stuffing in there so it was more of a rounded crevice, and honestly, you can't even tell that it was supposed to be any different! 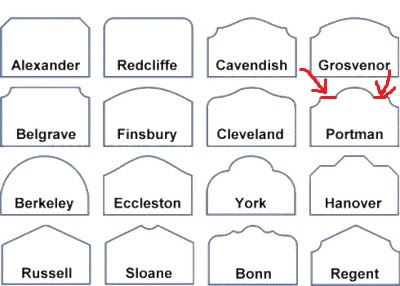 One of the options for headboards are to fix them to the wall, but we opted against that because it would just be easier if it wasn't attached if we ever moved it. We had some wood left over from our piece of wood we cut the headboard, so we cut out some planks that we screwed on to the back of the headboard which allows it to stand upright as you're seeing it in the picture. 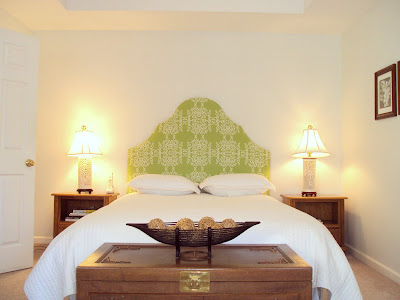 So although this took way too long for me to post, it was a relatively quick process and we completed it in a day. Of course I planned everything out in my spare time in the week prior just making sure I had exhausted all options of how to make it. Good luck on any attempts at your own!
Posted by Andrea at 7:21 PM 4 comments:

Sorry for the lame title, but I decided since "DIY Headboard" is exactly what I searched for on google when I was doing this project, I should go ahead and help anyone who may also be searching for the same thing.
When we left off, I was sitting around as my handyman did all of the dirty work. 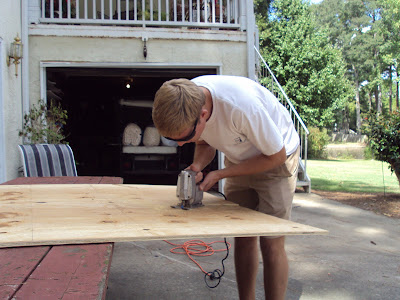 He is using a jigsaw to cut out the pattern of the headboard that we choose, which according to the following picture, is the "Portman" style. (How do you even pronounce "Grosvenor"?) 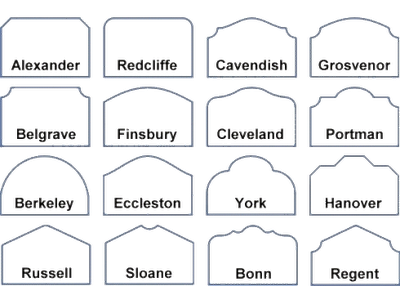 After many lengthy discussions of measurements, tactics for drawing the pattern, and how to obtain maximum accuracy, we finally just dived into it, which allowed for a few mistakes and learning.
I knew the basic measurements of how tall and how wide I needed the headboard to be and also where I wanted the curves to start going up, but the curves ended up being the most difficult things to draw on the piece of wood. We finally configured a makeshift compass out of a pencil and string in order to make sure we were getting a perfect rounded edge. After everything was measured, the handyman used his handy dandy jigsaw tool and cut away. (Cue me blogging the previous post)
Sorry for a lack of photos, but the next few steps included spray glue bought at JoAnn's, padding (actually mattress pads - they were cheaper than the padding at JoAnn's) bought at Wal-Mart, and batting. We had the pattern cut out on the piece of wood, so we laid it down and sprayed it like crazy with spray glue and stuck the padding on first - egg crating
side down. We then sprayed on top of that and stuck the batting on.
The next part is probably similar to intermission. Since we were working at the handyman's house but the headboard belonged at my house, it had to be moved over there, BUT both of our cars were too tiny. Lucky for us we live in a town with golf carts and paths, so here's how we transported it. 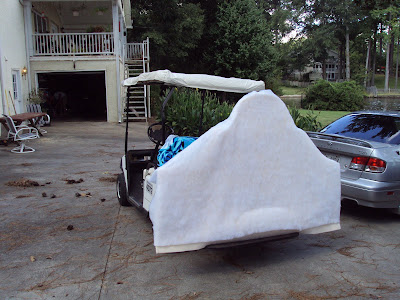 And also how we secured headboard on said transportation. 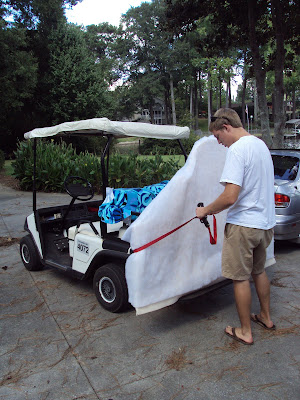 Running joke? Extra wide load on the cart paths coming your way!
Handyman drove while I sat on the back hanging onto that headboard for dear life. We made it to my house with a few minutes to spare before my mom came home from school, so unfortunately it was no longer a surprise but mom just LOVED it! She just had to see what it was going to look like before we even put any of the fabric she had been coveting in the corner of her room for months was even stapled on. 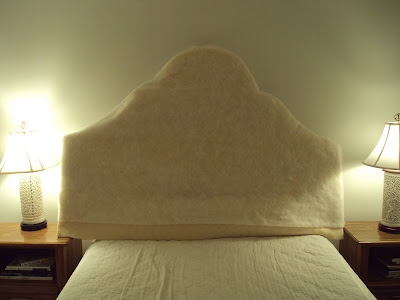 How embarrassing, but I don't have any after pics. They'll come along in the next post :)
[from] here
Posted by Andrea at 9:20 PM No comments:

My parent's room has been in desperate need of a makeover/facelift/TLC/any kind of new decoration for a long time now. Mom is too worried about the rest of the house to bother with her own room, so I've taken it upon myself (and my handyman aka boyfriend) to help her out in the form of an upholstered headboard. The project is going very well so far, and I'll give a more detailed post later, but I'm currently sitting out by the lake as I watch someone in particular use a jigsaw to cut plywood into the desired shape.
Grand inspiration:
Grace from Design Sponge made this headboard about a year ago and it's been floating around the world wide web ever since. I've watched her video at least three times now. 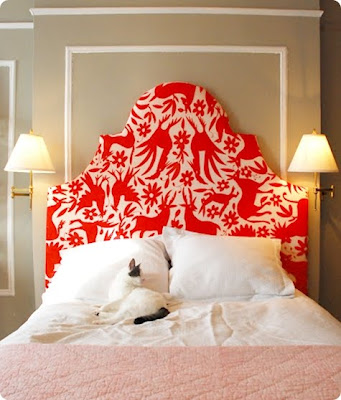 Things have been getting pretty crafty around our household. Some say it's that time of year while others simply have taken on way too many projects than they can handle. Either way, we embrace each one with our creative minds and get right to work. With Halloween quickly approaching, these stationary cards were fun and easy to make. Oh, and the "I scream!" was penned by yours truly. 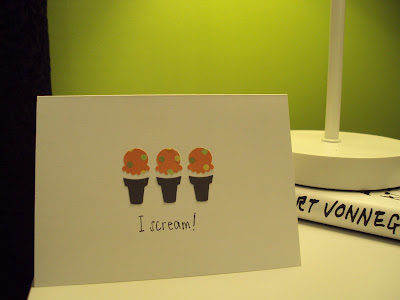 After eight weeks of nonstop studying of Anatomy & Physiology, I am more than relieved to be finished with finals and beginning my two week break. Unfortunately I just can't get away from the skeletal system. I recently perused Z Gallerie's website where, low and behold, the home page had a framed picture of the human body. I instantly zoomed in on the skeleton and clicked to "Shop Look". If only I had this picture to study from when I was learning all the bones in the body. 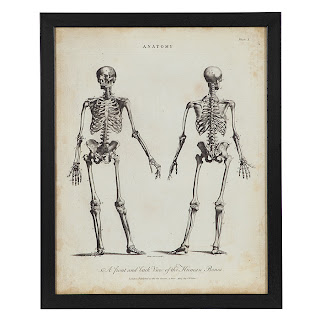 Upon further browsing, I came across a more taxidermist piece. I can't say that the moose is an animal that I am very familiar with (nor is taxidermy), but this mounted head would be so much fun to have in any room of a house! The white makes this a simplistic piece that would not be too overpowering or intimidating. 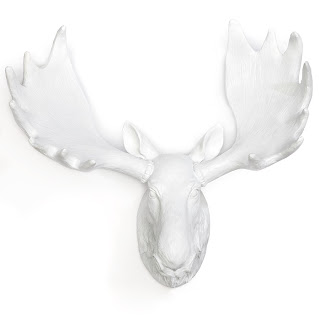 ...in lots of less-colorful books than these... 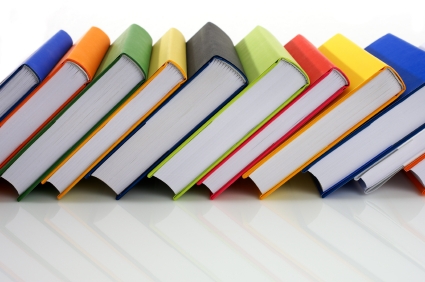 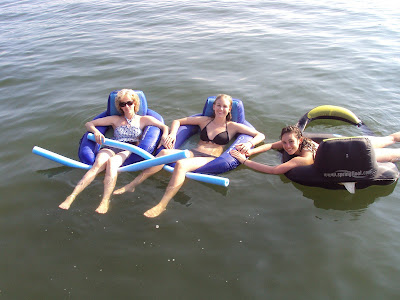 ...so I'm sorry, but I didn't think you'd be interested in what my life is currently consumed with: Anatomy & Physiology and Biology.
peace, love, and scientific thoughts :)
Posted by Andrea at 9:42 PM No comments:

My Tears for Ms. Spears 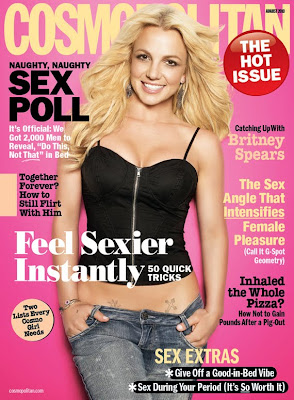 Who put this picture on the cover of Cosmopolitan?! This unfortunate display of my favorite Mouseketeer has watched me for weeks every time I check-out at the store. I just shake my head and look away from the discoloration in the extensions, the lazy eye (or the stink eye, as my sisters and I call it), and the bags under her eyes. Whoever was in charge of this photo shoot should be fired! The least they could do is photoshop it a little more, or choose a picture where her eyes are opened equally. I am very well aware that we all have our off days where we are less than photogenic, but help a girl out - she's been through enough - and let the public see the Britney who is not a train wreck. I haven't been able to bear opening the magazine due to the cover, but I hope Britney is redeemed by the spread of photos in her article.
Posted by Andrea at 4:42 PM No comments:

Of all the people they have booked to ring the opening bell, the cast of MTV's Jersey Shore may be the most bizarre. On Tuesday, I watched Snooki stand right smack in the middle of the rest of her roommates and ring in the financial day. Word on the (Wall) Street is that MTV would not allow the cast to give an interview after...hmm, 'stand and look pretty' much?
Posted by Andrea at 4:37 PM No comments: